For Richelle Scott, 14, and John Fielding, 15, the trip held even more special memories as they had the honour of laying wreathes on behalf of the school at the Menin Gate.

Richelle said: “Every night at 8pm at the Menin Gate the Last Post sounds. It was quite a proud moment for me to be able to lay the wreath and was something I will never forget.”

They also visited the different cemeteries where Allied and German soldiers were laid to rest.

John said: “In the German Cemetery there was a mass grave and plaques with up to 40 names on them. It was a depressing place.

“By contrast in the Allied Cemetery the white grave stones stood out and it was really well maintained. The stones also had a symbol on them to reflect the religion of the soldier in the grave. One grave was for a 14-year-old boy.

“Even though it is 100 years since the First World War, in the cemetery it felt like those grave stones could have been placed there last year.

“They are still finding bodies of soldiers in the fields in Belgium and every year they find another 30.

“Making a trip like this puts life into perspective. It makes you think about what really matters and what doesn’t.”

They also got to explore what life was like in the trenches by visiting a preserved First World War trench. 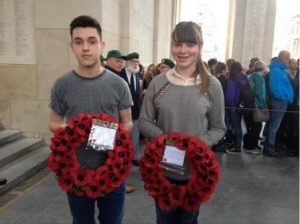 Honouring those who fell, John Fielding and Richelle Scott at the Menin Gate.