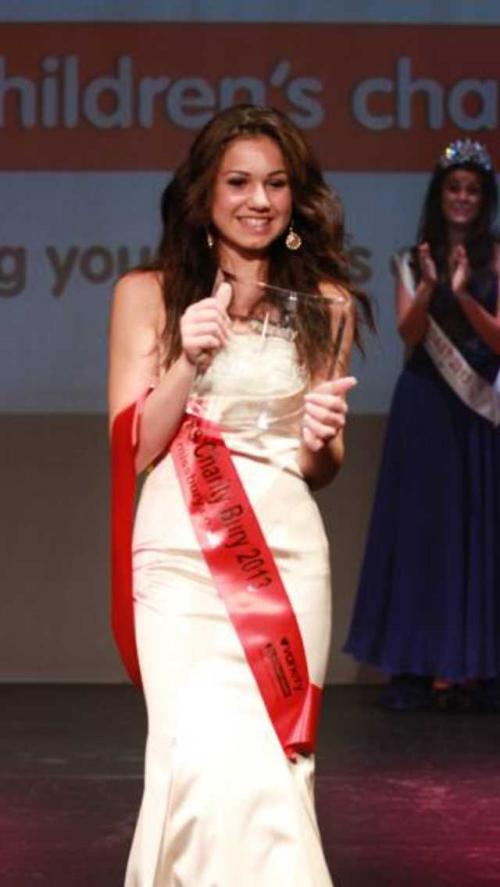 A CARING student who raised nearly £400 won the title Miss Charity and was runner-up in the Junior Miss Bury pageant.

Dominica Bilardi was ‘spotted’ while she shopped in Bury and asked if she would enter the competition for girls aged 13-17.

When she arrived at The Met she found she was the youngest person in her age group.

Dominca said: “As part of the competition we had to raise money for charity so I held a competition in my parents’ restaurant Carmelo’s in Tottington for a giant 4ft polar bear. There were 104 different names people could pick.

“I also collected sponsorship from friends, family and customers and, as I work there on a Saturday, I also donated my tips. I managed to raise £376 for the charity Variety North West to help children.”

At the pageant she had to model an eco outfit which could be from recycled material or an old dress refurbished. She chose to restyle her late Great-grandmother’s wedding dress and give it a 21st Century feel.

“As I was walking down wearing the dress I had to give a little speech about who I was and how much I had raised for charity,” said Dominica.

“I then had to model an evening outfit and my sponsor New Look gave me an outfit to wear for the day-time section.

“I really enjoyed the competition and have made loads of friends as a result. I met so many people it was really good. It is not about beauty, it was more about fashion and about showing what you are like as a person.”