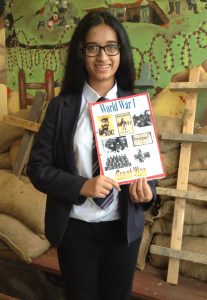 The Year 9 Haslingden High School student had her work entered into a competition organised by the Western Front Association.

History teacher Mandy Pollard explained: “I asked last year’s Year 8 to do a First World War project at the end of the year and entered more than 150 into the competition.

“The competition was open to schools all over the North West and we were delighted when Uzma’s work was picked as one of the best and she was awarded £25 and a book.

“The association is committed to educating the public in the history of the Great War fought on the Western Front. The competition has been running for two years but last year there were not many entries, obviously that has changed this year with all the publicity about the 100th anniversary.”

Uzma, 13, was delighted that her work was picked and put on display for the school’s open evening.

She said: “I created a book and inside I wrote and the start and the end of the war.

“I wrote about the trenches and about what it was like for soldiers living in them. I also found First World War poems and included them in the book.”

The project was set as homework and also completed in lessons over four weeks.