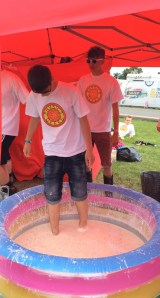 PHYSICS Geeks from a Rossendale high school were invited to run activities at a charity event arranged by Radio 2 DJ Chris Evans.

Haslingden High School physics teacher Philip Rawlinson said: “I have been to Chris Evans CarFest at Oulton Park in Cheshire for the last couple of years and I approached the organisers about bringing our school’s physics geeks to run activities for children.

“They said yes and covered our campsite fees and provided free electricity.”

A team of 15 students spent a weekend camping and running activities at the cars, food and music event that attracts an audience of 300,000 over the three days.

Reece Goodchild, 14, from Year 10, said: “It was great waking up every morning knowing that you were going to help to teach other people all about science.

“We had different experiments that we were running but walking on custard proved the most popular one with over 200 people having a go. We were expecting maybe 10-15 people and instead we attracted thousands to our stall.”

The students got through 100kg of cornflour over the three days to create the custard and all ended up hating the sight and smell of it. Each morning they had to mix the ingredients together in a paddling pool ready for the first challenger to walk over it.

As the festival also has music concerts on an evening the team also got to see groups including Erasure, Toploader and Texas.

Jacob Ashworth, 14, from Year 10, said: “I thought it was really great getting people interested in science. After they had done the experiment we would give them the scientific explanation.

“We had six or seven different experiments like putting cocktail sticks into balloons and badge making.”

CarFest North and South events are held to raise money for the BBC TV appeal Children In Need. Haslingden High School has already been invited back to attend the 2015 event.