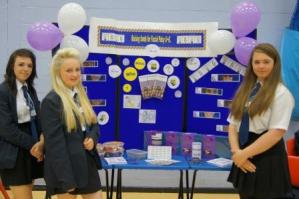 STUDENTS and staff raised hundreds of pounds for charity Facial Palsy UK to raise awareness of a condition that has affected a colleague.

Kay Turner, Haslingden High School Headteacher Mark Jackson’s Personal Assistant, has been affected by Bell’s Palsy twice. It left her temporarily unable to move the muscles on one side of her face.

She was explaining the condition to some students when they decided to use their stall on Charity Day at school to raise money.

Mrs Dawes completed the run alongside her husband Frank, son Sam and his girlfriend Laura and she finished the run in 1hr 24 mins and 31 secs.

“The second time I was affected was a lot worse than the first. I had to tape my eyelids closed in order to sleep and really struggled to eat because I was unable to use my muscles.

“It totally paralyses one side of your face, it is not contagious, but people struggle to understand what is wrong with you.”

After both incidents she spent months slowly regaining the use of her facial muscles.

When Mrs Turner was affected the second time, she found out about the charity and their support group based in Manchester.

She said: “The charity was only set up in 2012 and people from as far as Carlisle come to the group which meets every three months. Many people do not know about this charity and I want to raise awareness of it in local health centres.”