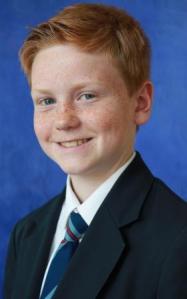 STUDENT Aaron Thornton discovered he had a hidden talent when he provided some moral support to his mum on a 5k run.

The Haslingden High School student not only found he was good at running – he actually won the race at Witton Park in Blackburn.

Aaron, 12, from Accrington, said: “My mum started running on a scheme called ‘Couch to 5k’ where you run a bit each day and work up to running 5k.

“She asked if I would come along and so I joined her in the beginners group.  We then went on to run with the improvers group and we were supposed to run 5k but it ended up at 7.4k and I won the race!”

Aaron admitted he had never done any proper running before but has now joined Blackburn Harriers, is signing up to do the Manchester 10k next year and ultimately hopes to be able to complete a marathon.

Meanwhile his mum, Michelle, is continuing with her running and now runs three times a week at Witton Park and sometimes runs around the streets near home mid-week.

He said: “Before my mum did this she would not be able to run for more than five minutes. She says how much better she feels doing exercise now.”