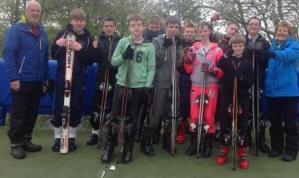 Tom, Alice and James Chapman are all seasoned skiers. Tom, 17, and Alice, 16, teach at Ski Rossendale while James, 13, has been skiing since he was three and is a regular at the Rawtenstall slope. They all go on annual skiing holidays.

They joined three other students who were also representing Haslingden High School as a sixth form team entry in the North West Schools’ Competition at Pendle dry ski slope at Sabden.

James said: “We had a few practices and then we had to do a slalom course.”

PE teacher Mrs Wilson said: “We have entered for the last three years but never won a team event before. I am delighted.”