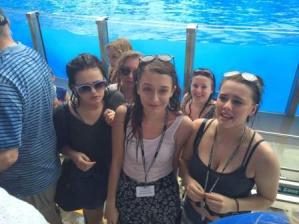 A FANTASTIC fun trip Florida was enjoyed by 36 students from Haslingden High School.

They also took a trip out to the Kennedy Space Station where they had hoped to see a launch but unfortunately it was cancelled at the last minute.

For one student Lewis Gore, 16, it was the first time he had flown in a commercial plane.

He said: “I have had some flying lessons in a small plane at Blackpool Airport, but nothing like this. It was so loud it made my ears pop and it was all very nerve wracking going down the runway.

“The best bit about the holiday was going round Universal Studios.”

For Isabella Kenyon, 16, the best bit was getting to know the other students and teachers.

She said: “We were like a little family. For most of us it was the first time we had been away without our parents and we got to know everyone so much better.”

Another student Emily Creedon celebrated her 16th birthday on the day that the group visited SeaWorld and all got soaked by a whale.

Maths teacher Heather Pearce said: “The students were fantastic right from the start and they were praised by the flight attendants, the park staff and everyone who came into contact with them.

“They were perfect representatives of the school. This was the first school trip I have taken abroad and I am hoping to take another one soon.”