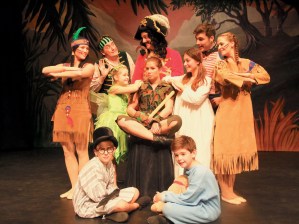 TWELVE-year-old Jamie-Leigh Brown appeared on national television this week as an extra in the new series Happy Valley.

Jamie-Leigh from Haslingden High School narrowly missed gaining the leading role in the TV programme when producers decided to make the main child character a six-year-old boy instead of an 11-year-old girl.

But she still got to appear in the school scenes and spent two days being filmed.

“I also got to meet Sarah Lancashire,” said Jamie-Leigh. “She came in to talk to a group of us and she is really nice. She was really friendly.”

It is not the first time the Year 7 student has met a famous actor as she also appeared in ‘The Fonz’ Henry Winkler’s Hank Zipzer series on CBBC.

“I was an extra in the school scenes and I had to dress up for a Hallowe’en party,” she said.

“Henry Winkler was so nice. We did a scene that involved a treasure hunt and he kept making things up.

“I went for the audition for the main part in Hidden Valley and I got down to the last two but then they went for a boy because they had to make sure the person was a good match for the people playing the parents.”

Jamie-Leigh, from Norden, has been acting since she was eight as a member of HeyKids in Heywood and has taken on a number of roles. She is now hoping to play a Munchkin in the HeyKids’ production of the Wizard of Oz.

She also starred as Tinkerbell in Peter Pan at the Gracie Fields Theatre in Rochdale.

Jamie-Leigh added: “I have always wanted to be a primary school teacher but I would also like to carry on acting as well.

“My mum and dad Annette and Trevor think it is really good and they like to watch me on TV.”

And Jamie-Leigh is not the only actor in the family – her brother Lewis, 15, also appeared in Peter Pan when he took on the role of John Darling.