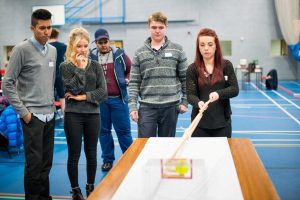 FOR the sixth year in succession Sixth Form students from Haslingden High School won the trophy in the Rotary Club Technology Tournament.

A total of 42 teams from different year groups, schools and colleges in Burnley, Pendle and Rossendale entered the tournament at Nelson and Colne College.

The challenge was to design and make a tool to pick up a tennis ball from a box with a limited opening.

Josh said: “We created a tool similar to tongs using elastic bands and were able to pick up the tennis ball and place it onto a target in less than 30 seconds.”

They also had to create a design document.

Hayley said: “We came up with several different designs and these were all documented and we then used a majority vote to come up with the final design that we created.”

Head of Design and Technology Craig Greenwood said: “We entered three teams and as always the students were a credit to the school and the Sixth Form.”

My Tweets
This site uses cookies: Find out more.