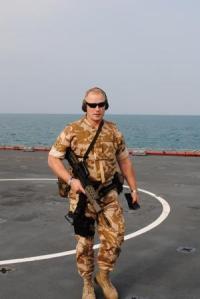 CATERING manager Iain Campbell is switching uniforms as he takes up a role as a Royal Navy reservist in a major training exercise.

He served his country in Iraq before being appointed as catering manager at Haslingden High School but he will be missing from his department for nearly three weeks from March 23. But he will not be absent without leave.

Instead, he will be in Stornoway on the Isle of Lewis in the Outer Hebrides playing a key role in a military exercise supporting a multi-national fleet of various Navies from around the world.

He said: “The main centre will be at the Faslane Naval Base on the Clyde and I will be getting my instructions from them.

“My role will be to move passengers, mail and cargo. I will be predominantly dealing with casualties, making sure they receive treatment and ensuring they are safely repatriated.

“I would not be able to do this were it not for the support I have received from my line manager Deborah Dawes, the headteacher Mark Jackson, the catering team and the Senior Leadership Team at Haslingden High School.”

Two training exercises are carried out each year in the UK and Mr Campbell, 47, has been involved previously, before he worked for Haslingden High School.

He said: “There will be a very large number of personnel involved in this operation and there will be 18 in our team keeping an eye on everyone. We will be extremely busy.

“I will also be responsible for problem solving; if there is a ship with a part missing I will have to source it so the operation can continue. It will be a 24-hour job.”

He is also a recruitment officer with the Royal Navy and advises students to complete their studies before they consider a career in the forces.