WHEN politicians were invited to take part in a Question Time event it proved to be a real turning point for one student.

Year 11 student Abby Butler had been weighing up whether to study to become a midwife or take up an apprenticeship.

She watched the politicians in action at the school’s Question Time, as MPs Jake Berry and Graham Jones along with Rossendale Councillor Steve Hughes put forward their differing points of view on a range of controversial issues.

In true Question Time format, Head of Humanities Mrs Powell took on the role of David Dimbleby.  Students were required to submit their questions in advance before having the opportunity to ask local political figures about topics ranging from tuition fees, to the UK’s involvement in the European Union.

Abby said: “It made me think about how I really want to be able to make a difference and if I was to become a lawyer then maybe I could change a few people’s lives.”

So the midwifery and apprenticeship have now been shelved, and once she completes her GCSEs, Abby is looking to study A levels in history, law, psychology and sociology. She now plans to go to university to study law.

Mrs Powell, who is also Able, Gifted and Talented Co-ordinator, said: “I wanted to organise an event which raised awareness for young people about the importance and relevance of politics in everyday life. With a general election in the near future, for some of our sixth formers, it will be the first time they have the chance to vote and having that opportunity is so important. We need to make people realise that politics is life, it is relevant, and you have to participate if you want to have a say.” Mrs Powell also noted the importance of allowing students to make informed choices: “By giving students knowledge and understanding it helps them to make these decisions.”

Abby’s mum was so pleased that her daughter had re-evaluated her options in light of the event, she wrote on Rossendale MP Jake Berry’s Facebook page to highlight the impact that the session had had on her daughter.

She told the MP: “She really enjoyed the whole experience and is even now talking about going to university to study law, something she has always been against – all because of what she heard today. Thank you for taking the time to talk with the students today; for our daughter, it’s really made a huge difference.” 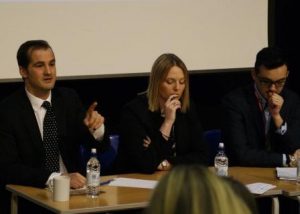 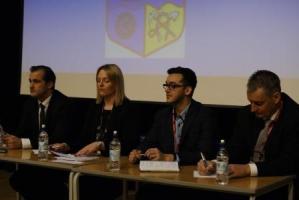