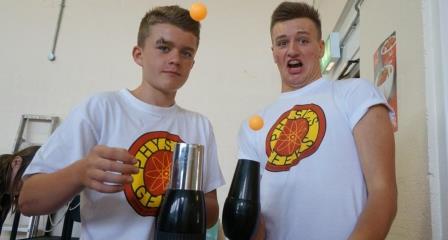 MAKING physics fun is a challenge a group of students at Haslingden High School have risen to.

A team from the Physics Geeks organised a series of assemblies for the whole school – some 1,250 students, to empower and encourage students to realise physics is not a dull and boring subject.

Year 11 student James Harding explained: “We did different physics practicals that we think are interesting including making a ball hover on a leaf blower and bursting a balloon using a laser light.

“We also spoke about some of the famous physicists who have changed what we understand.”

They also showed the students a video of 100 balloons being burst using a laser light. After the assemblies a lot of the students approached the team to ask about the subject.

Physics teacher Phil Rawlinson said: “This group started when the students began their Cambridge iGCSE, which is a harder course than a normal GCSE aimed at high achieving students.  The groups consists of target A* students and I wanted to do something that pushed them further.

“They have been doing weekend lessons and even came in for two days during the Christmas holidays.”

The Physics Geeks ran a fund-raiser during the school charities’ day when they let people walk on custard. They ran a science day at nearby Broadway Primary School, organised events at open evening and even have their own website www.physicsgeeks.co.uk

Ultimately, it is hoped they may be able to run a summer school.