BUDDING actress Phoebe Spencer-Hall beat off tough competition to secure the role of Scrooge’s sister in a touring production.

In November and December the Year 9 student at Haslingden High School will take to the stage in the Talkwood Productions version of the Dickens’ classic ‘A Christmas Carol’.

Fortunately for Phoebe, 13, she also played the role of Fran Scrooge last year so doesn’t have new lines or songs to learn although the dances have all changed. 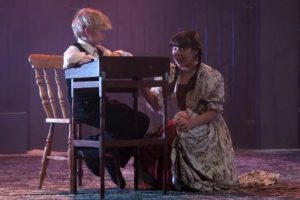 Phoebe, from Weir, said: “There were more people who entered for the role this year and they had to make sure that I was the right size because another actor takes on the role of Scrooge’s brother.

“They were looking for two teams of 10 young people and I am the oldest member of one of the teams.

“The rehearsals are at The Poor School in London and I will be travelling there every Sunday.

“The production will be on at a variety of different theatres including Dartford on Christmas Eve and Charing Cross Theatre in London.  The nearest venue to home is Halifax.

“I will have 10 days off school, but I will have all my lessons sent to me so I can keep up while I am touring.

“Next year they are hoping the production may get into the West End so… who knows. I couldn’t just pass up this opportunity because it is something I really want to do – as long as I keep up with my school work.

“I started dancing when I was two and acting at about three or four.”

She attends Rossendale Dance and Drama Centre in Waterfoot where she is also in the cast of Beauty and the Beast and will be on stage four times in their production at the same time.