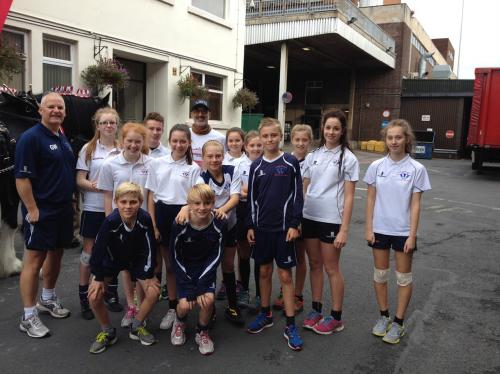 A TEAM of 16 students joined an ‘old-boy’ from Haslingden High School Ilyas Khan on a run for charity.

Businessman Ilyas, who used to own Accrington Stanley, is the president of Leonard Cheshire Disability, an international charity which helps the disabled.

One of the students who joined him on a three-mile stretch in Blackburn was Shauna Williamson, 14, from Year 9.

She said: “Many of the students who took part are also members of Rossendale Harriers. We set off from Thwaites in Blackburn to complete the run and it was at a pretty slow pace. It was good to lend support though.”

Leonard Cheshire was the name of the first Squadron leader of 617 Squadron – the Dambusters.

PE teacher Erika Wilson said: “The three younger boys were excited to meet James and they had their photo taken with him and he signed their school football shirts.

“While Madison Jamison and Nicole Kershaw are horse-mad and spent ages stroking the Thwaites’ shire horses. We are hoping to do a whole school effort to raise money for this charity when we do the 12 minute run assessment in PE.”

Ilyas will also be the special guest at the GCSE Awards’ Evening in December.