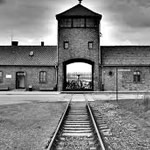 AN EMOTIONAL tour of Auschwitz left A-level students Amy-Lee Haynes and Callum Mitchell determined that the Nazi atrocities should never be forgotten.

The Year 13 students at Haslingden High School were on a 24-hour tour organised by the Holocaust Education Trust.

On arriving in Krakow, Poland, as part of an 800-strong delegation from the North West, they first visited a Jewish cemetery.

Callum said: “After the Nazis invaded Poland they had smashed up the gravestones in the cemetery and ripped it apart.

“What was heartening was that when we went in we found some people had tried to piece the tombstones back together but they looked almost like building bricks.

“From there we went to Auschwitz One.”

Looking round the death camp museum the students found themselves face-to-face with the belongings of people who had been sent to the gas chamber. Piles of suitcases, glasses, pots and pans filled the rooms.

Amy added: “The main thing that stuck in my mind was a room full of human hair. Reading about something in a book is nothing like seeing it in person, it really affected me.”

But even in the gloom, Callum found a glimmer of hope. “Amongst all the dull pairs of children’s shoes, was one pair that had retained their red colour and it reminded me of the little girl in the red coat seen in Schindler’s List,” said Callum.

They also visited Auschwitz-Birkenhau, where they saw the camp from a watchtower but were then shocked when they realised how big the complex was.

Before the visit they met a Holocaust survivor and they were fortunate to meet a second while they were on the tour.

“They dressed in SS uniforms, got a gun and stole one of the cars before managing to escape the camp by threatening the guards and screaming at them.

“It is ignorant not to go there. I think everyone should do it at least once in their life.”